The origin and history of our two logos

In this introduction we want to tell you about the history of our two logos.

For our first logo we counted on the unselfish collaboration of our friend Maria Corvera (Amphisbaena, from now on). Although the selection process was expressive, several ideas were developed. Here are some:

All of them were discarded after having decided to create a logo that had relation with the theory of Pythagorean origin, Musica universalis (Harmony of the spheres). The allegorical idea of “creating a new galaxy” took shape, this being the chosen logo:

What is the relationship between music and cosmos (Harmony of spheres, for example)?
The novel La Música de las Esferas (formerly known as En Clave de Sol) by writer Luis F. F. Simón explains the theory Harmony of spheres with considerable argumentative emotion and certain historical licenses (comprehensible from a literary point of view). If you prefer an original text of the ancient Greeks, take a look at Aristotle’s On the heavens. For example, this fragment:

From all this it is clear that the theory that the movement of the stars produces a harmony, i.e. that the sounds they make are concordant, in spite of the grace and originality with which it has been stated, is nevertheless untrue. Some thinkers suppose that the motion of bodies of that size must produce a noise, since on our earth the motion of bodies far inferior in size and in speed of movement has that effect. Also, when the sun and the moon, they say, and all the stars, so great in number and in size, are moving with so rapid a motion, how should they not produce a sound immensely great? Starting from this argument and from the observation that their speeds, as measured by their distances, are in the same ratios as musical concordances, they assert that the sound given forth by the circular movement of the stars is a harmony. Since, however, it appears unaccountable that we should not hear this music, they explain this by saying that the sound is in our ears from the very moment of birth and is thus indistinguishable from its contrary silence, since sound and silence are discriminated by mutual contrast.

This first logo also served as homage to other influential historical figures related to the universe, such as Copernicus, Giordano Bruno, Kepler, Carl Sagan and Neil deGrasse Tyson (presenters of the Cosmos series) and even the ancient Greeks themselves. In mid-2017 it was replaced by the current one, after a year and a half of representing the MusiChess brand. Thank you, Amphisbaena, for leaving us this legacy!
Why was it decide to change the logo in mid-2017?
Mainly by professional recommendation. After contacting the company Karboncillo, it was recommended we include at least one element of music and one element of chess in our logo. Finally, after having weighed numerous logos, we opted for the following: 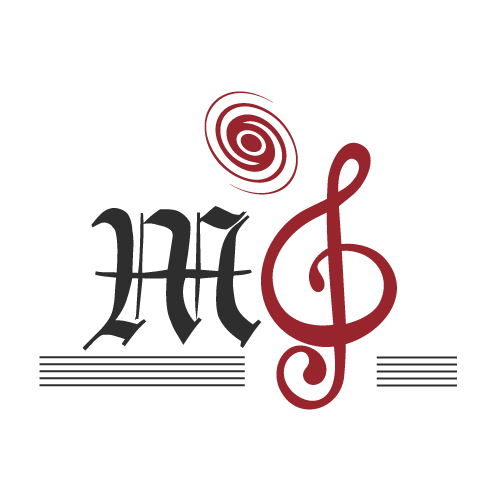 As you can see, this new logo, besides having golden proportions, is made up of more elements than the previous one. This time a galaxy (MC) will be the element that represents the universe. Remember our motto, “the awakening of a new galaxy…”. The treble clef and the pentagram represent the music, whereas the tower will be the piece in charge of representing chess.
It is at this time, with a renewed logo and web, when MusiChess begins a new era. Because as Carl Sagan said: “We will travel through the Cosmos with the vessel of imagination without the usual obstacles of speed and size. The music of cosmic harmony will guide us through space and time. Perfect as snow, organic as a seed of dandelion; the ship will travel to worlds of dreams and worlds of facts. Come with us”.

PS: Do not stop listening The Planets by Gustav Holst.

To improve our services, we use cookies (own and third parties authorized). If you keep visiting the website, we assume you accept their use. You can change the configure or obtain more information here