Lili Boulanger was a French composer and conductor. Her compositions are characterized by a great musical maturity, and show a latent sadness due to tuberculosis, illness that Lili suffered until his death. At only 21, she won the prestigious “Prix de Rome” award for her musical work “Faust et Helene”, being the first woman to win this award.
Picture: Lili Boulanger, by Teresa Cabanillas

Marianna Martines was an Austrian singer, pianist and composer of Classicism, student of Haydn and Nicola Porpora. She was a precocious interpreter, offering concerts in the royal court from a young age and having a very active musical career. Among his compositions are masses, oratorios, cantatas, sonatas, concerts, and a symphony, in addition to others. Throughout his life, she offered a large number of evenings in her house, rubbing shoulders with great artists like Haydn, Mozart or the poet Metastasio
Picture: Marianna Martines by Teresa Cabanillas

Ethel Smyth was an English composer and political activist who fought to legalize female suffrage. His musical works include, among others, symphonies, choral and lounge music. She excelled in the composition of operas by its originality. For two years, Ethel left the music to join the Women’s Social and Political Union (WSPU), and defend the political and constitutional rights of women.

Florence Price was the first African-American composer whose works were performed by a symphony orchestra. His music is full of American roots inspired by the blues, fused with European romantic music. In this way, Price manages to reflect the life of the African Americans in the big cities. His music managed to inspire the next generations of African-Americans.
Picture: Florence Price, by Teresa Cabanillas

Germaine Tailleferre was a French composer who belonged to the group of six or “Les Six”, a musical group of the 20th century with great relevance created as a rebellion against the impressionism and music of the German composer Richard Wagner. Inspired by Erik Satie (who composed pieces for this group) and collecting the ideas of Jean Cocteau, “Les Six” was formed by Georges Auric, Louis Durey, Arthur Honegger, Darius Milhaud, Francis Poulenc and Tailleferre, who was the only woman of the group.

Although his most striking musical works are his small pieces, Tailleferre also composed chamber works, concerts, studies, ballets, operas, etc. A work that until the last decades has remained unpublished.

Sappho, also known as Sappho of Lesbos, was a Greek poet included among the “nine lyric poets”. Among his poems are examples of popular lyric, as well as some popular songs created as impromptu nuptial songs. These songs are different from the rest of her poems due to an impregnated feeling of greater intimacy, created with a rhythm of her own that was later renamed “Sapphic Stanza”.
Picture: Sappho by Teresa Cabanillas

Francesca Caccini was the first woman who composed opera. His prolific career as a singer, composer, teacher and poet was a great inspiration at the beginning of the Italian Baroque. With five operas, in addition to religious, vocal and instrumental pieces, Caccini became one of the highest paid composers of the Court of the Medici.
Picture: Francesca Caccini, by Teresa Cabanillas

Saint Hildegard of Bingen was abbess, monastic leader, mystic, prophetess, physician, composer and German writer, known as the Rhine Sibyl and as the Teutonic prophetess. With a total of 78 musical works, created for the liturgical needs and for the theological-moral didactic, Hildegarda uses the monophonic technique, the melisma and the own notation of its time. Their music is differentiated by the use of wide tonal ranges, which require the singer or the choir to rise to intense treble while on an intermediate or low note. In her compositions, she makes contractions of melodic phrases that drive the voice to be faster and then slow down. In addition, it is ahead of its time thanks to the use of intervals of fourth and fifth, when the singing rarely passed of thirds. Regarded as one of the most fascinating and multifaceted personalities in Western Europe, Pope Benedict XVI awarded her the title of Doctor of the Church in 2012.

Jeanne-Louise Farrenc was a French composer and pianist of great reputation, praised by great composers like Schumann or Berlioz. She composed both chamber music and orchestra music, as well as works exclusively for piano. After her death, her name and her works went sadly to oblivion, but her music, of great quality, has transcended to our days thanks to the works of musicological research.

Nadia Boulanger was a composer, pianist, organist, conductor and French teacher. After the death of her sister, she devoted her teaching career to important musical centers such as the American Conservatory of Music and the Royal Academy of Music in addition to other institutions, teaching musicians such as Daniel Barenboim, Astor Piazzolla, Philip Glass, Aaron Copland, Narciso Yepes or Walter Piston, among many others, who would become great figures of the musical panorama of century XX and XXI
Picture: Nadia Boulanger von Paradis by Teresa Cabanillas

Maria Theresia von Paradis was an Austrian pianist, singer and composer, blind since the age of four. It is said that Mozart composed his concert no. 18 for piano in her honor. As a highly acclaimed pianist, she traveled throughout Europe, offering concerts in the main European Courts, achieving great success throughout the continent. On her return to her native Vienna, she devotedhimself mainly to musical composition through a system invented by her friend Riedinger so that blindness was not an impediment to composing music, thanks to which Maria Theresia could compose instrumental music, chamber music, Songs and opera.
Picture: Maria Theresia von Paradis by Teresa Cabanillas

Cécile Chaminade was a precocious French pianist and composer, with more than 200 compositions of romantic style. Since his first concert at age 18, his fame grew, and he became a well-known figure, thanks to his piano pieces and his chamber music.

Barbara Strozzi was one of the most outstanding composers of the Baroque period. Strozzi published eight volumes of musical works, of which stand out his cantatas for soprano, framed in the technique of the Seconda Prattica of Claudio Monteverdi. 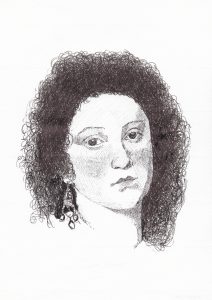 Princess Enheduanna is considered the first woman musician in history. Her father, King Sargon first, appointed her High Priestess. Enheduanna is the only known woman writer of Mesopotamian literature and the first writer of History. Her poems are the oldest of the universal literature. Among other works, she writes the “Hymn to Inanna”, composed to be sung, as we can see different repetitions of words in different sounds, associated with musical notes.

To improve our services, we use cookies (own and third parties authorized). If you keep visiting the website, we assume you accept their use. You can change the configure or obtain more information here